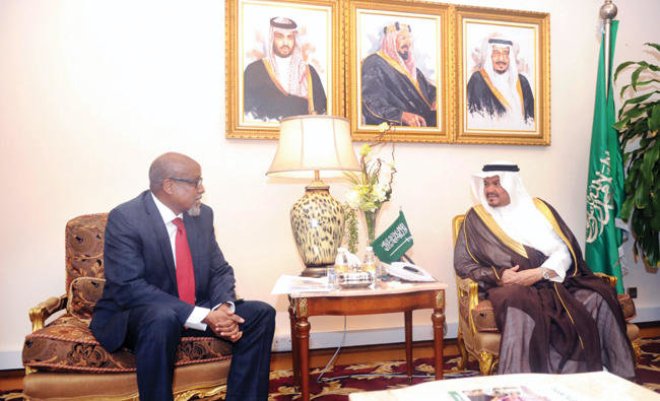 RIYADH/JEDDAH: Minister of Hajj and Umrah Mohammed Salih Bentin on Thursday received Somali Minister of Endowments and Religious Affairs Iman Abdullah Ali and his accompanying delegation in Jeddah.
Bentin discussed strong bilateral relations and topics related to Somali pilgrims, briefing Ali on Saudi efforts to take care of pilgrims and new services launched by the Ministry of Hajj and Umrah this year. Ali praised those efforts.
Meanwhile, the ministry said local and foreign pilgrims who wish to perform Hajj this year should be vaccinated against meningitis and seasonal flu.
The ministry also urged pilgrims to commit to other requirements specified for their respective countries.
A list of requirements for those coming for Hajj and Umrah was circulated to Saudi embassies in all countries before they began granting pilgrimage visas for this year.
The ministry’s command and control center follows international and local health situations, and reviews and updates health requirements when necessary.
Over 127,000 Bangladeshi pilgrims expected this year
A total of 127,198 pilgrims is expected from Bangladesh this year, an increase of 11,000 over last year, Ambassador Golam Moshi said after receiving the first pilgrims from his country in Makkah.
“During the past three days, we have received 10,471 pilgrims who are now performing their rituals in Makkah,” he told Arab News.
Pilgrims are being ferried to the holy city on 28 flights operated by Saudi Arabian Airlines and Biman Airlines, the national carrier of Bangladesh, he added.
A group of government officials, including a medical team, has already arrived to assist pilgrims during their stay in the two holy cities, Moshi said.
Bangladesh consulate officials in Jeddah and officers from the Bangladesh Hajj office in Makkah will be available to help existing staff serve pilgrims.
Indonesian Hajj committee gears up for arrivals
The Hajj affairs section of the Indonesian consulate in Jeddah is gearing up for the arrival of the country’s pilgrims.
This year, as many as 221,000 Indonesian pilgrims will perform Hajj. They will come via 508 flights, and will be transported from 12 embarkation points in Indonesia to the airports of Madinah and Jeddah.
The first batch of 393 pilgrims is scheduled to touch down at Madinah’s Prince Mohammed bin Abdul Aziz International Airport on Friday.
As many as 730 Hajj personnel and officers from Indonesia’s Religious Affairs Ministry, and 174 from the Health Ministry, will assist the pilgrims.
Indonesian Consul General Mohammed Hery Saripudin reminded the personnel that they had been entrusted with a noble task to serve pilgrims, so they should perform the task professionally and with responsibility and passion.