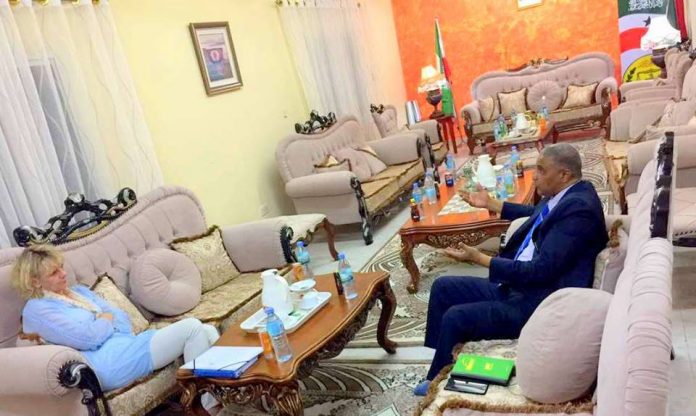 Horndiplomat-The governments of Denmark and Somaliland has concurred on the imperatives of enhancing existing relations between the two countries.

This development follows a meeting between Somaliland Presidency minister Hon:Mohamoud Hashi Abdi and Denmark Ambassador to Kenya, Somalia, Eritrea and the Seychelles ambassador Mette Knudsen at the Berbera presidential palace in which the Danish team also revealed intent to support the ongoing democratization process in Somaliland.

The Meeting discussed on issues about the Upcoming presidential election and Development projects that Denmark Implemented in Somaliland.

The Presidency Minister Mohamoud Hashi abdi Speaks about that meeting says “I met with the Denmark delegation led by ambassador Mette Knudsen, Denmark Ambassador to Kenya, Somalia,Somaliland Eritrea and the Seychelles At Presidential palace in Berbera, Denmark Is a our closed freind of the Republic of Somaliland and also led the countries that supports Somaliland Development and Democracy, We are so Grateful for their supports .”

“The government and people of Somaliland value very much the support given by the people of Denmark towards improved live hoods especially as pertains to the Somaliland Development Fund-SDF” said Presidency Minister adding that Somalilanders are intent on not only sustaining but enhancing on the very deep relations existing between the two nations.

The Somaliland’s presidency minister also touched the government mission to establish diplomatic and economic allies says “ this is a Government efforts that we need to enhance the international cooperations and development progressive of the country.”

Denmark together with Britain and Norway are main contributors to the multi-million Somaliland Development Fund (SDF) which is geared to the provision of a single vehicle through which donors can support Somaliland’s development goals.

The Danish ambassador also met with Somaliland’s civil society Groups and  inspects the denmark projects has implemented in the country for the last five years .

Twitter posts about the Ambassador Knudsen Visit to Somaliland