An improvised explosive device exploded and killed four people in a passenger vehicle in northern Kenya in a suspected extremist attack, an official said Friday, as fears grew that the al-Shabab extremist group in neighboring Somalia had adopted a deadly new strategy.

The Kenya official, who spoke on condition of anonymity because he was not authorized to speak with the press, said the vehicle had 15 people on board and the other 11 were critically injured. He said one of those injured is a government chief.

Similar explosions in Kenya in the past month have killed at least 34 people, including 20 police officers. Suspicion has fallen on al-Shabab extremists.

Analysts call the blasts a change in strategy by al-Shabab, which has been carrying out attacks inside Kenya since 2011. The extremist group has called the attacks revenge for Kenya sending troops to Somalia to fight it as part of a multinational African Union force. 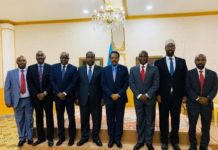