One morning early in his freshman year at Cornell University, Ahmed Ahmed got a writing assignment back, flipped it over and stared at the letter in shock: C+.

He went to his biology class, where the professor displayed a large graph showing the distribution of the grades for the exam, for which, like the writing assignment, Ahmed had studied really hard. The average was 85, with a very small deviation.

He walked quickly to a lake near campus, wiping away tears. Even with his always-laughing, perennially optimistic personality, Ahmed couldn’t help but realize that despite everything he had done to earn a spot at Cornell, and how much a degree from the Ivy League school could transform his own life and his family’s, hard work might not be enough.

It happens every year to freshmen, not just at Cornell but also all top universities, said the school’s former president, Hunter R. Rawlings III; the students were all-stars in high school, and both the competition from classmates and the expectations from professors are so much more intense that there’s often a midterm punch in the gut.

But few have as much at stake as Ahmed.

He didn’t talk about his past until sweeping rhetoric from the campaign, and President Trump’s executive orders on immigration, pulled him up short. Many Americans support Trump’s efforts to tighten border controls, targeting certain countries including Somalia, as a means to keep radical Islamist terrorists out of the country.

[Revised executive order, if upheld by courts, would ban travelers from six Muslim-majority countries from applying for visas]

For Ahmed though, it hit home. “To place this broad, encompassing stereotype or narrative on a whole group” didn’t make sense to him, he said. “I know how unique every individual story is.”

Ahmed said he suddenly felt it would be a injustice — as a black man, as a refugee, as a Muslim, as an immigrant — not to tell his own story. Ahmed’s family fled Somalia during the country’s bloody civil war. Their home had been targeted repeatedly by robbers, the last time by a group of men who stormed in wearing black ski masks and carrying AK-47s.

[Somalis are fleeing famine, only to find death in a place of refuge]

Ahmed was born in a refugee camp in Kenya, his parents’ eighth child and their “lucky baby,” as they called him: After his birth, they were granted asylum in the United States.

It was the greatest gift, his mother later told him. They could live in a country that prided itself on liberty and freedom.

“It was this beacon of hope,” he said. “Here you could come and if you worked really hard, you could pursue any idea you had.”

They rented a tiny apartment in Riverdale Park, Md., putting mattress pads down on the living-room floor each night to sleep, then putting them away in the morning. His parents each worked two jobs at factories in Baltimore and told the children to come directly home from school and stay inside; they wanted to shelter them from the drugs and crime that were common in the neighborhood at that time. They told them education and hard work would change their lives.

When his parents got divorced, he moved with his mother to Rochester, Minn. He felt like an outsider there, for the first time; many of his classmates’ parents were engineers at IBM or doctors at the Mayo Clinic.

He was living with a single mom who was working as a hotel maid. In his first seven years, they moved six times.

And he felt that expectations from teachers for minority students were low. But his mother kept telling him, “You can do anything you set your mind to.”

When he was in seventh grade, his father fell ill on a trip to Africa and died — a death Ahmed felt could have been prevented with better medical treatment.

When his mother injured her back at work, his sister, a senior in high school, got a job on a factory assembly line.

Seeing that kind of determination and sacrifice every day made Ahmed all the more committed to working hard, to learning more.

When he was 16, he began working at a nursing home to help his family get by. He enjoyed the feeling of turning someone’s day around with a smile. Soon the work sparked an interest in biology and medicine, and he began to dream of becoming a doctor. His grades were top-notch, and he shadowed doctors at the Mayo Clinic, awed by their dedication to their patients and the discoveries they were making.

With all of that behind him, and so much possibility ahead, facing the prospect of failure at Cornell was terrifying.

After the tears that day in October 2013, he emailed the two professors and asked for help.

In the writing seminar, he learned he hadn’t honed his thesis well enough to leave an indelible idea. After talking with the professor in his evolution class, he realized that the way he had studied — reading the textbook carefully, focusing on all the details that hadn’t been covered in lectures, memorizing everything — left him missing the big picture. In the exam, the professor manipulated variables, posing different scenarios and asking students what would happen with those changes.

Suddenly, he understood: As a researcher, he would need that kind of mind-set, trying to discover new things, not just storing away information that was already known. He had to think hard, and creatively, with a true understanding of the ideas in the class.

“That was my ‘Welcome to Cornell’ moment,” Ahmed said, laughing.

He didn’t forget it. He took those unexpected grades to heart, using them not only as a spur to improve his own studies, but also as a lasting reminder to help others do the same.

In his organic chemistry class sophomore year, he and hundreds of other students watched as Geoffrey Coates, the professor, held up a glass flask and tested a solution for a chemical compound.

It was a class of 600 or so students, mostly pre-med, talented students all competing to get the best grades. There’s always a high level of anxiety at that point in the semester, Coates said. “A lot of tears have been shed on the front steps of the chemistry building,” he said.

Ahmed watched, amazed, as the reaction in the solution deposited a silver mirror on the inside of the flask until it was entirely coated with silver, gleaming. It almost seemed like alchemy, Ahmed said, seeing the power of organic chemistry.

Coates gave him the flask as a keepsake: On the last exam, of the 600 students, Ahmed had received the very top score.

And he asked Ahmed if he was interested in research — far from a given, since most pre-med students are necessarily focused on getting top grades in the intensive required courses. Ahmed was.

And so began Ahmed’s research into polymers, never an area he had expected to delve into, but one that he has found fascinating. They were working to find a way to make one of the most commonly used plastics without relying on fossil fuels.

“This is very, very high-level research with Geoff Coates, one of our very top chemists,” Rawlings said.

“I love the problem-solving aspect of it,” Ahmed said. “You’ve got this initial starting material, here’s your end, and you have to design a multistep synthesis to get there.” He liked the extra challenge of having to prove it in the lab after he had “solved” it on paper; he laughed at some of his early ideas, which worked in theory but required incredibly expensive, or potentially dangerous, chemicals.

In the spring, Ahmed designed a catalyst that lets them use vegetable oils to create the plastic. “I’m excited to get back in the lab and work on this — oh, man!” he said, jumping out of a chair to sketch out the chain reaction on a whiteboard. “This happens within milliseconds, it’ll reattach … now, boom, boom, boom, your double bond is now here.”

It still needs work, Ahmed said, but he expects it to result in publishable work.

“It’s a really important advance for the Center for Sustainable Polymers,” Coates said this week.

Over the years at Cornell, Ahmed was also making time to volunteer, including with emergency medical technicians on campus, and a mentoring group formed to improve graduation rates for black men.

With some really high-achieving students, you can get a sense that they’re checking all the boxes they need to check, said Steven Strogatz, a professor of mathematics at Cornell. But with Ahmed, he said, “it’s really heartfelt.” He remembered an essay Ahmed wrote about shadowing doctors treating a young man with gunshot wounds, and wondering what separated him from the patient: Not much, really.

Ahmed could see how much impact his time could have on younger students struggling to fit in on campus. He would give them advice on when to apply for internships, how to ask for extra help, suggestions on study skills.

“He’s just really an amazing individual,” Coates said, combining intellect, discipline, and an ability to handle intense pressure with grace. “He’s fun to talk to. He makes everybody around him happy and excited.”

“There are just people who, when they walk into the room, grab you. They have that charisma,” Strogatz said. “He’s got this sunny, upbeat attitude,” one that’s infectious, and that makes even something that might sound corny ring true. The example Strogatz gave: Ahmed keeps a gratitude journal and writes in it every day.

“So when I’m having those tough days where I feel emotionally drained,” Ahmed explained, “I just flip back through my gratitude journal and read through all that I am thankful for, and it goes a long way.”

Ahmed graduated this weekend, with his family joining him at Cornell for the first time, meeting his friends and professors, enjoying it all.

He’s still hoping to go to medical school. He hopes to work in communities that need more doctors, one day, and find ways to improve access to care more broadly. He remembers how his older brother had to live with pain in his teeth and his stomach until it became acute. He remembers his father’s death.

But first, he’s going to Britain: Ahmed will be a Rhodes Scholar.

Rather than studying organic and medicinal chemistry at Oxford College, as he initially planned, he will pursue a master’s degree in higher education. He’s going to study the barriers that can keep students whose parents didn’t go to college, students from low-income families, and minorities, from higher education.

It bridges to his interest in medicine, he said, because care will improve in underserved communities if medical professionals are more familiar with the issues their patients face.

While Rawlings worries that top students, such as Ahmed, will be snapped up by other countries, such as Britain, if the United States is unwelcoming, Ahmed is full of gratitude.

“I feel like my story would only be possible in a few other countries — if any,” he said. He and his family are all U.S. citizens now.

The United States has been the beacon of hope his mother promised: “This country has been amazing for us.”

When he called his mom to tell him he got the Rhodes, she said, “What? … You’re leaving the country?” 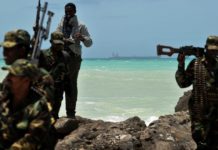