Somalia’s new president, Mohamed Abdullahi Farmajo, was to visit Ethiopia on Wednesday in a much-anticipated meeting aimed at smoothing over decades of mistrust. Farmajo has been criticised for waiting three months before going to Addis Ababa.

The Ethiopia trip is by far the most important visit abroad that President Mohamed Abdullahi Farmajo will make and it is also the most difficult, says Gérard Prunier, a French historian specialising in the Horn of Africa.

Farmajo has visited five other countries, including Kenya, beforehand.

“He didn’t have the guts to go there first,” Prunier told RFI by phone on Tuesday.

“Since it’s going to be a controversial visit with difficult circumstances, difficult dialogue, he probably postponed it until he felt it was absolutely necessary.”

Yet he almost did not make it to the presidency due to meddling from the Ethiopian government.

“The Ethiopian government backed a different candidate, so there was speculation that the new Somali president may actually be hostile to Ethiopia, a regional country with a military presence in Somalia,” Rashid Abdi, Horn of Africa Director at the International Crisis Group in Nairobi told RFI.

Yet the urgency of Mogadishu’s security concerns leave Farmajo with little choice but to do business with Addis.

“Definitely there is a huge security imperative which is how to deal with Al Shabaab,” Abdi says. “Al Shabaab is an existential threat not only to Somalia but to the region. And I think that security cooperation between the two countries will be very central to how they move forward.”

Relations though weren’t helped when Ethiopia pulled its troops from Somalia last October.

Since then, the regional force has secured significant gains: driving out Al Shabaab militants from the Somali capital Mogadishu. But the latter remain active in the rural parts of Somalia.

“Al Shabaab remains a formidable threat still and clearly there will be expectations of a more robust Amisom push against Al Shabaab,” at the talks, Abdi reckons.

“The question is, to whom will President Farmajo speak?” Gérard Prunier says.

“Since the death of President Meles Zenawi, there are various factions who all have different views on what’s going on in Somalia.”

The decades-old conflict over Ogaden, the Somali region in eastern Ethiopia, is not likely to be top of the list, though.

“Things have changed significantly in the past 10 years and I think that the Somalis in the Ogaden part of Ethiopia and north-eastern Kenya are no longer harbouring secessionist views,” says Abdi.

That leaves Somaliland, which still very much wants to be recognised as an independent country. It’s also a battleground for Gulf countries because of ongoing military operations in Yemen.

The United Arab Emirates announced their intention earlier this year to open up a military base in Berbera in the self-declared state of Somaliland.

“Farmajo pretends Somaliland is still part of Somalia,” continues Prunier. “Of course he says the government in Somaliland is not authorised to sign an external diplomatic contract of such an important thing as welcoming a country which is at war [United Arab Emirates] on its territory.”

Except Somaliland did sign an agreement with the United Arab Emirates in February. Abu Dhabi and Saudi Arabia have been fighting Houthi rebels in Yemen since 2015.

“The real issue behind Farmajo’s visit to Ethiopia is Yemen”, says Prunier. “Farmajo wants to stop Somaliland from hosting the UAE military base and Ethiopia are reluctant to have Arabs back in the region after dozens of Ethiopians were killed during the Abyssinian-Adal conflict of the 16th century.”

The former rivals could thus see eye to eye on Somaliland. The latter remains excluded from next week’s international conference on Somalia in London. 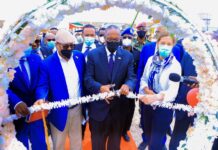