Chinese investment in Djibouti can turn the smallest country on the African Horn into a Mecca for tourists, according to Osman Abdi Mohamed, managing director of the National Tourism Board. Sputnik takes a look at the recent developments in Djibouti.

“The Chinese military base will serve as a starting point for the development of tourism and we believe that it will pay off,” Osman Abdi Mohamed said, the South China Morning Post newspaper reported.

Chinese investors have set their eyes on the shore of the Ras Siyyan Peninsula in the Bab-el-Mandeb Strait.

Bab-el-Mandeb means “Gate of Sorrow” in Arabic. The strait received its name because of the many dangers that could be encountered while sailing across the strait.

The district, which China intends to develop, is located between the Red Sea and the Gulf of Aden.

According to the reports, China is building its military facility in Djibouti to deal with pirates in this region. The coast is located only 20 kilometers from the Yemeni island of Perim.

Furthermore, there is a plan to build a luxury hotel in the Bab-el-Mandeb. In another part of the peninsula, an airport will be constructed. An important factor which makes this area attractive is that the nearby Bay of Tadzhur is a place where whale sharks swim during their breeding season.

This makes the coastal waters of Djibouti one of the best places in the world to observe that kind of marine life.

Djibouti is already reaping some rewards of China’s involvement. By virtue of its level of economic development, Djibouti would have never laid a trans-boundary water pipeline from Ethiopia.

The pipeline, which is being built with Chinese participation, will provide fresh water to local residents and foreign tourists.

In April, the construction of a multifunctional port is going to be completed. Chinese companies have invested billions of dollars into this port.

The port is connected via a modern railroad leading to Ethiopia and from there to most of the East African countries.

The modern railroad started operating in January this year and it is able to provide economic benefits, including facilitating access to many of Djibouti’s tourist attractions.

China’s construction of a military facility in Djibouti can be considered an additional factor of security for China’s growing investments in the economy and infrastructure of the country, Alexander Larin, an expert at the Institute of the Far East, said earlier in an interview with Sputnik.

The construction of the Chinese military base will be presumably completed at the end of this year. It can play an important role in protecting China’s growing economic presence in Djibouti and in Africa as a whole, according to the expert.

According to The Associated Press, for years there has been a growing hostility towards Chinese traders, which erupted with the protest of hundreds of local shopkeepers in Kampala. They urged Chinese traders to close their business, accusing them of unfair competition.

Chinese traders allegedly came to Uganda as serious investors and then set up small-scale businesses.

The AP also stated that the mayor of Kampala, Erias Lukwago, supported the protests. He said that the government should protect local traders to prevent the outbreak of protests and attacks on foreign traders.

Chinese investors have poured $400 million into Djibouti to build a trading port and to develop a free trade zone in the region. In addition to bolstering China’s naval presence in the Red Sea, the Gulf of Aden and the Arabian Sea, the base will likely serve as a headquarters for roughly 2,200 Chinese soldiers stationed in Africa as part of peacekeeping operations.

Earlier, US Marine General Thomas Waldhauser said the base presents security concerns to the US. 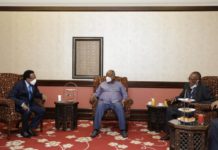