Nairobi – African Union forces in Somalia (AMISOM) should release the findings of their investigation into alleged unlawful killings of 14 civilians by Ethiopian forces in July 2016, Human Rights Watch said today. More than six months after the incident, people in Wardinle in Somalia’s Bay region have received no reports on the investigation nor compensation for their loss.

On July 17, troops from AMISOM’s Ethiopian contingent fired on a hut in Wardinle where men had gathered to pray for a sick villager, killing 14, Human Rights Watch’s investigation found. Those gathered included village elders, religious leaders, and Islamic school teachers as well as relatives of the sick man. Witnesses told Human Rights Watch they had seen no fighting or Al-Shabab militants in the village that day

“The killing of elders, teachers, and religious leaders devastated the poor rural community of Wardinle and should not be swept under the carpet,” said Laetitia Bader, Africa researcher at Human Rights Watch. “The African Union and Ethiopian leadership needs to hold its forces to account by releasing its findings, ensuring that any wrongdoers are brought to justice, and compensating the victims.”

On July 19, AMISOM said that it was investigating the claims and said its preliminary investigations had found that: “AMISOM forces received credible intelligence information, of an Al-Shabaab’s radicalization exercise in the village and went to investigate. The troops were ambushed as they approached the village and intensive fighting ensued…. It is not clear at this point in time, if the fighting occasioned civilian deaths, as it is being claimed.”

Some media reported fighting in the village between Ethiopian forces and the Islamist armed group Al-Shabab on the day of the killings. In September, AMISOM informed the United Nations Security Council monitoring group on Somalia and Eritrea that an initial inquiry had found that the men were killed in crossfire. The seven witnesses interviewed by Human Rights Watch said they had not seen fighting in the village or the presence of Al-Shabab fighters that day.

International humanitarian law, or the laws of war, obligates the parties to an armed conflict to take all feasible precautions to minimize harm to the civilian population.

Attacks that target civilians or civilian objects are prohibited, as are attacks that do not discriminate between civilians and military objectives, or that are expected to cause civilian harm greater than the anticipated military gain. The laws of war require governments to investigate credible allegations of serious violations that may amount to war crimes.

The evident absence of Al-Shabab fighters indicates that the attack on the hut was unlawfully deliberate or indiscriminate, and possibly a war crime. The AU and judicial authorities from Ethiopia should work together to ensure those responsible are brought to justice and to prevent such crimes from happening again, Human Rights Watch said.

Ethiopia officially joined AMISOM in 2014 and also deploys significant forces inside Somalia outside of AMISOM. Countries that contribute troops to AMISOM have jurisdiction over their personnel for any criminal offenses they commit in Somalia and so are responsible for investigations and prosecutions.

These countries are bound by memorandums of understanding (MoUs) signed with the AU and by international human rights and humanitarian obligations to investigate and prosecute criminal offenses. Human Rights Watch is not aware of any investigation by Ethiopia into the incident.

The MoUs empower the AU to initiate investigations when a troop-contributing country is unable or unwilling to do so and to hold boards of inquiry.

In August, Human Rights Watch wrote to the Special Representative of the Chairperson of the AU Commission for Somalia (SRCC), Ambassador Francisco Madeira, to share initial findings and raise concerns about delays in AMISOM’s investigation into the incident. In October, Human Rights Watch learned that AMISOM was conducting a board of inquiry.

Human Rights Watch has found significant limitations to AMISOM and troop-contributing country responses to allegations of abuses against civilians. The investigations are often one-sided, relying heavily on AMISOM soldiers or official sources without meaningfully consulting other witnesses or local residents, do little to ensure protection of witnesses or to provide feedback to affected communities. AMISOM did interview survivors from Wardinle, a number of whom had told Human Rights Watch that they were willing to explain what they experienced that day.

The UN Security Council, which meets on January 27 to discuss the situation in Somalia, and international donors to AMISOM should place greater emphasis on ensuring that AMISOM forces comply with the UN’s Human Rights Due Diligence Policy and abide by their obligations under international law, Human Rights Watch said.

In July, the Security Council had renewed AMISOM’s mandate and called on AMISOM to improve relations with local communities. In August, AMISOM announced it would start making “amends” to civilians for harm resulting from its military operations. The Wardinle victims and their families are entitled to amends payments, which do not require a showing of fault, Human Rights Watch said.

“The UN Security Council called on AU forces to improve their relationship with communities most affected by this conflict,” said Bader, “Public reporting of investigations into Wardinle and other such incidents and adequate compensation for victims would be an important start.” 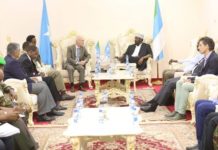 AU, UN call for for peaceful and credible elections in Jubaland 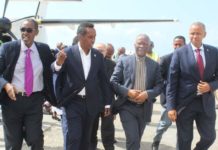 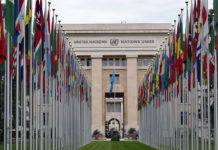 An open letter to the Security Council, the African Union, the European Union and IGAD 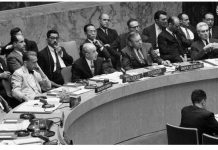 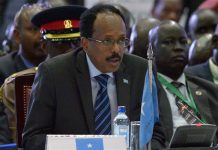 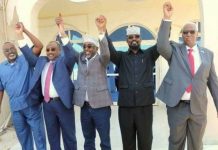