NAIROBI, Dec. 29 (Xinhua) — The UN refugee agency said it has repatriated some 38,159 Somali refugees in Kenya since the return exercise began in December 2014.

The United Nations High Commissioner for Refugees (UNHCR) said in its bi-weekly update received in Nairobi on Thursday that some 1,743 returnees were supported to voluntarily return to Mogadishu, Kismayo and Baidoa by flight between Dec. 1 and 15.

The agency said the number of flights has been significantly increased as it remains the only means of transportation to Somalia.

Kenya in collaboration with the UNHCR are working on a program that will ensure a smooth and voluntary repatriation of over 300,000 refugees living in five camps at Dadaab, which Nairobi has planned to close.

The UN agency has said it expects the majority of the remaining refugee population to return to Somalia throughout 2017 and possibly into early 2018.

Kenya said it had put solid measures in place to fast-track repatriation of Somalia refugees and their re-integration in their native country.

The East African country on Nov. 16 announced that it would delay by six months the closure of the Dadaab camp, the world’s largest.

UNHCR has supported people’s returns from Dadaab for years and in June, it worked with Kenya and Somalia to devise an action plan to that effect.

A survey between August and October found that 283,558 refugees were living at Dadaab, 58,000 fewer than in the past.

The UNHCR has since called on Kenya to be flexible in terms of a return time frame in order to meet the different elements of the plan that was devised earlier this year, citing concerns that rigid time frames would be difficult to meet. 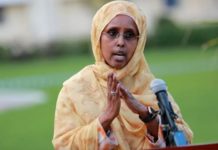