At least 25 soldiers were killed in weekend fighting between rival Puntland and Galmudug regional forces in the Somali town of Galkayo, military officials on both sides said today.

“We have lost 12 men and there are more than 10 wounded,” said Puntland commander Jumale Jama Takar, while his Galmudug counterpart Abdirahman Qoje said: “We have lost 13 soldiers and nearly 20 others wounded.”

The commanders blamed each other for starting the fight.

The divided city of Galkayo, about 700 kilometres northeast of the capital Mogadishu, has seen repeated clashes in recent weeks but Sunday’s fighting is the deadliest yet and marked the collapse of a short-lived peace agreement between the two semi-autonomous Somali states.

In September the US was drawn into the rivalry when Galmudug authorities accused Puntland of duping US forces into carrying out an air strike on its soldiers, killing 13.

Residents said the toll may be higher than the rival parties admit and included civilians as well as soldiers.

“We are asking both sides to show restraint and stop the war,” said Mohamed Farah, a traditional elder in the city.

“Yesterday alone 35 people have been killed and more than 100 others wounded. Most of those killed are the combatants but there also civilian casualties on the both sides of Galkayo.”

Another resident, Bile Abdulahi, said there was no fighting on Monday but that the city remained tense.

“There are still some dead bodies strewn around the contested area. Fighting can resume anytime,” he said.

Somalia is in the process of selecting a new parliament, upper house and president in a limited franchise election that involves 14,000 delegates from all regional states, including Galmudug and Puntland.

Political tensions have been rising and threats from the Al-Qaeda-linked Al-Shabaab militants have increased in the run-up to the delayed vote, originally due in August. 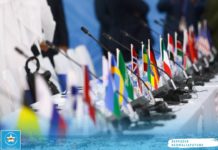 Somalia: Int’l partners express concern over political developments, including in the Federal Parliament