The spokesman of Nyambene Miraa Traders Association (Nyamita) Kimathi Munjuri said that business was back to normal after a one-week suspension.

On Wednesday, only two cargo planes went to Mogadishu due to lack of sufficient supplies.

“The 25 planes, all full to capacity left for Somalia today (Thursday). The demand was very high following the suspension,” Mr Munjuri said.
Ads By Google

He, however, said miraa traders were waiting for answers on concerns emerging from the recent suspension of flights by the Somali government.
Mr Munjuri had earlier said that miraa traders lost about Sh500 million in the seven days that cargo flights to Mogadishu were suspended.

“Only five planes have been operating when the Somalia government cancelled cargo flights last week. For the first three days, there were no significant flights as traders were reorganising themselves,” Mr Munjuri said.

In the last one week, cargo planes ferrying miraa have been using Galcaio, Las Anod, Bassaso and Baladweyne airports in Somalia.

More than 15 cargo planes deliver the stimulant to Mogadishu every day. 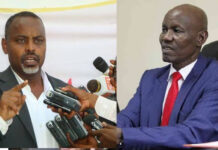