WASHINGTON (AP) — President Barack Obama will hit the campaign trail Tuesday to rally support for Democratic presidential nominee Hillary Clinton in Pennsylvania, a state that has served as a firewall for her party in the past six general elections but is now viewed as competitive.

Obama is scheduled to appear without the candidate herself. Clinton was scheduled to make a fundraising swing to California, but will take a couple of days off from the campaign trail after being diagnosed with pneumonia.

Obama will seek to generate momentum for Clinton in a race that has become uncomfortably close for many Democratic supporters. The latest poll by Quinnipiac University found her with a 5 percentage point edge over Republican Donald Trump in Pennsylvania. Obama will speak at a plaza in front of the Philadelphia Museum of Art. He’ll also attend a fundraiser for the Democratic National Committee in Philadelphia and then fly to New York City for a Democratic Congressional Campaign Committee fundraiser.

The candidate Obama hopes will succeed him left a 9/11 ceremony after about 90 minutes Sunday and struggled to stay on her feet while she was helped into a van. Her campaign said she had “overheated,” but later revealed that she had been diagnosed Friday with pneumonia. The episode played into Trump’s efforts in recent weeks to raise doubts about Clinton’s stamina.

Clinton’s campaign was already on the defensive after she used the term “basket of deplorables” to describe half of Trump’s supporters.

“I think the president’s belief that she’d be an excellent president of the United States is something that you’ve heard him say many times. And I can tell you there’s nothing that happened yesterday that has changed that assessment at all,” Earnest said.

Earnest deflected several questions Monday about whether both candidates were being forthcoming enough in releasing details about their health. He said it’s ultimately the candidates themselves who have to make the decision about what kind of information they release and the level of detail. Still, he said that Obama remains confident Clinton has the strength to carry out the demands of the presidency.

When asked about Clinton’s use of the term “basket of deplorables,” Earnest made clear that “it’s not the president’s phrase.” But he also said there has been a “disturbing tendency on the part of Republicans in Washington, D.C., to try to appeal to extremists for political support.”

Copyright 2016 The Associated Press. All rights reserved. This material may not be published, broadcast, rewritten or redistributed. 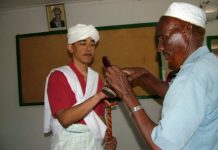