Home News Securing Somalia, Whatever the Cost
Share on Facebook
Tweet on Twitter
horndiplomat-Securing Somalia, Whatever the Cost
Officers from the African Union Mission in Somalia (AMISOM) patrol in Mogadishu in 2015. After the European Union announced cuts to its AMISOM funding, some participating African countries have threatened to withdraw. (MOHAMED ABDIWAHAB/AFP/Getty Images)

Somalia has posed a key security challenge for the international community in recent decades. Islamic extremism, warlords, famine and piracy have cemented the country’s reputation as a failed state. Since it formed in 2007, however, the 22,000-strong African Union Mission in Somalia (AMISOM) force has helped to stabilize the country, making notable gains against the militant group al Shabaab.

Notwithstanding the force’s successes, the European Union, AMISOM’s largest financial contributor, decided recently to cut funding to the mission by 20 percent. For African member states with troops on the frontlines, the decision has been hard to accept. Reports have circulated that AMISOM soldiers have not been paid in months and likely will not receive wages again until the European Union resumes funding in September. Now, countries such as Kenya and Uganda have threatened to pull out of AMISOM, and Kenyan President Uhuru Kenyatta has vowed that participating African states will not fill the funding gap left by the European Union’s cuts. Despite their grumbling, African member states have too much at stake in war-torn Somalia to leave the country anytime soon.

Money alone does not drive AMISOM. Although the mission’s soldiers receive wages well above the average in their home countries, Kenya, Ethiopia, Uganda, Burundi and Djibouti each have other distinct reasons for participating. Ethiopia and Kenya share long, porous borders with Somalia, and both have suffered attacks by al Shabaab. Furthermore, a security vacuum in neighboring Somalia provides a haven for rebels from neighboring countries — such as Ethiopia’s Ogaden militias. This explains why Kenya and Ethiopia have unilaterally intervened in Somalia in the past. 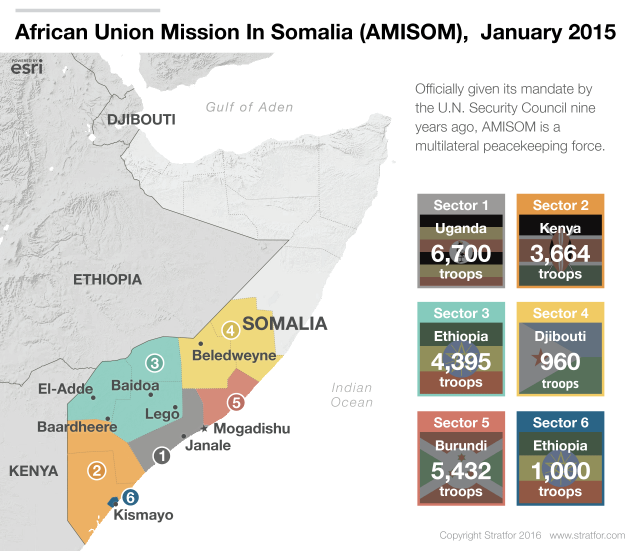 But even countries without borders with Somalia, such as Uganda, have a significant stake in preventing collapse in the Horn of Africa. AMISOM has proved effective in steadying Somalia. Since the mission began, the Somali government and international forces have regained control of most of the country’s urban centers and ports as well as its entire coastline. The country’s leadership, once selected by clan delegates rather than elected through a popular vote, has become a technically full-fledged government. In addition, Somali diaspora investment into the country has increased, and the government hopes that more conventional foreign direct investment will follow. For a small African country such as Burundi or a landlocked one such as Uganda, committing resources to an important regional conflict can garner international attention and increase visibility. External funding can also enable cash-starved states to subsidize larger militaries.

As African governments threaten action over the financial cuts, Uganda has announced that it will pull its approximately 6,700 troops from Somalia in late 2017. The decision could have serious ramifications. Uganda’s withdrawal would coincide with Somalia’s End of Transition Roadmap, which stipulates, among other things, that the country must have democratic elections by August 2016. Consequently, the new Somali government would have only about a year to consolidate its power or for the international donor community to find replacement troops.

Because security gaps remain throughout the country and terrorist attacks still plague its capital, any lapse in security could result in a reversal of Somalia’s gains, even if a different nation’s troops came in to compensate. Moreover, if other AMISOM members follow Uganda’s lead, an unlikely outcome at this point, regional stability would come under significant threat. International training missions have cultivated a small contingent of professionally capable forces in Somalia’s military. Even so, the Somali military is still a mostly ragtag and corrupt force, too weak to take on a resurgent al Shabaab on its own.

Meanwhile, Somalia faces other challenges on the horizon. Kenya’s government wants to shut down the numerous refugee camps in its country. Combined, the camps house hundreds of thousands of people, many of whom fled Somalia. Kenya’s president has insisted that the camps will be closed starting in November, citing concerns that they may harbor al Shabaab militants. Though the United Nations and the United States have expressed worry over the situation, Kenya has been adamant that it will carry out the task. It remains to be seen how Kenya would go about shutting down the camps — which more closely resemble cities — and repatriating Somali refugees. The undertaking would almost certainly strain aid supplies and create a humanitarian crisis, likely increasing Kenya’s own instability in the process. Given the dire consequences the camps’ closure would unleash — and the blowback to Kenya — Kenya’s threats may be an attempt to draw international attention and funding back to the Horn of Africa now that they have shifted to crises elsewhere.

Unconfirmed reports suggest that the United Nations is considering converting the AMISOM force to a U.N. peacekeeping mission. This could prove beneficial in two ways. First, it would allow the United Nations to draw on a host of different countries if an African state were to pull out. Second, it would likely offer more stable funding less reliant on the European Union. But for now, any possible conversion remains a long way off, especially since the United Nations has already increased peacekeeping forces elsewhere, including in Mali.

AMISOM and its international partners have made great strides in reversing some of the territorial control that Somali militants have enjoyed in recent years. Their efforts have taken pressure off the nascent Somali government, enabling it to proceed with its transition. So regardless of the hardship that budget cuts will cause the mission’s African governments, their interest in Somalia’s success will likely compel them to continue their support for the time being.